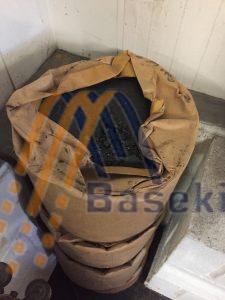 The interlayer bonding of modern multi-layered pavement system plays an important role to achieve long term performance of a flexible pavement. Bonding bitumen issue has been observed that poor bonding between bituminous pavement layers contributes to major pavement overlay distresses such as premature fatigue, top down cracking, potholes, and surface layer delamination. One of the most common distresses due to poor bonding between bituminous layers is a slippage failure, which usually occurs where heavy vehicles are often accelerating, decelerating, or turning.

To enhance the bonding between layers, a tack coat is sprayed in between the bituminous pavement layers. A tack coat is an application of a bituminous emulsion or bituminous binder between an existing bituminous / concrete surface and a newly constructed bituminous overlay. Normally, hot bituminous binders, cutback bitumens or bituminous emulsions are used as tack coat materials. This study is aimed to evaluate the bond strength at the interface between pavement layers by performing laboratory tests. To carry out this objective, three special attachments are fabricated for use in Marshall Loading Frame for finding the performance of tack coat laid at the interface between Bituminous Concrete (BC) and Dense Bituminous Macadam (DBM) layers in the laboratory. In this study, the results of the specimens prepared with 100 mm and 150 mm diameter specimens using two types of normally used emulsions, namely CMS-2 and CSS-1 as tack coat at application rates varying at 0.20 kg/m2 , 0.25 kg/m2 and 0.30 kg/m2 made at 250C temperature are presented. iv It is observed that CRS-1 as tack coat provides higher interface bond strength value compared to CMS-2. Similarly, irrespective of the types of emulsions used as tack coat, the optimum rate of application is found to be 0.25 kg/m2 as recommended in MORT&H’s specifications. Keywords: Interlayer, bond strength, shear strength, tack coat, performance