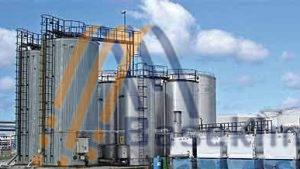 Process of oxidation of bitumen

Bitumen is a hydrocarbon product which is received as the distillation bottom product of an oil refining process and has a high boiling point and viscosity and is soluble in trichloroethylene. Also the soluble binder product separated from natural asphalts by extraction is bitumen. To improve the properties of bitumen it can be oxidated to be suitable for intended applications. This oxidation can be carried out by leading air to the bitumen which is oxidated by the effect of the oxygen diffused into the oil phase from the air.In modern preparation methods of oxidated (blown or semi-blown) bitumen qualities the air needed for the oxidation and the bitumen oil is brought into contact in a large volumed reactor (so-called bubble column technique). The drawbacks of the method are the safety risks because of the large oil and gas volume, the high oxygen content of the rest gas, a bad adjustability of the reaction and the reduced quality properties of the product because of the long retention time.

The contact between the bitumen and the oxygen has been improved by using a turbine mixer in the oxidation of the bitumen. This turbine mixer comprises a mixer foreseen with an impeller that consists of a cogged face plate. The use of such a mixer does not, however, essentially improve the transfer of the material.It is also mentioned as prior art which is concerned with a method of oxidation of bitumen by air in a large volume reactor. The aim of this invention is to reduce the retention time of the oxidation reaction and thus avoid reducing of the quality properties. The cold properties are even improved. The aim is e.g. to achieve a bitumen product suitable to be used as road coating expressly in cold conditions, as in the Northern countries, which for instance means that no fractures are allowed to be formed into the coating.

The method of the invention is mainly characterized in that the oxidation is carried out by leading a supply stream of bitumen or the like and an air stream or another pressurized gaseous oxidant to a reactor which is a so-called rotating apparatus and in which reactor the contact between the air or other gaseous oxidant and the bitumen or the like is improved by generating turbulence by mixing devices of rotor-stator type that generate shear forces to achieve a good mixing.

The advantageous embodiments of the invention have the characteristics of the subclaims.
The contact between the air and the bitumen is carried out in the invention by using high turbulence. The reactor used in the invention generates turbulence by using mixing devices of rotor-stator type that generate the shear forces: the bitumen and the air are forced through the reactor in such a way that strong shear forces and much mixing is directed to those with a good dispersion of the air as a result that is very advantageous for the contact. In the preparation method of the invention, the reactor used to improve the contact of the air-bitumen mixture, the so-called rotating apparatus, is a so-called power homogenizer, which is a mixing device of the type wherein the mixing is achieved ¦ by one or more rotor-stator pairs, alone or in series.