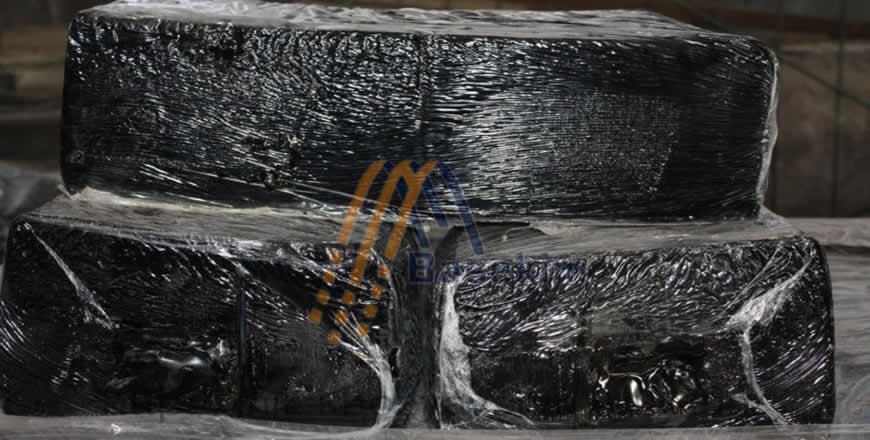 The present invention relates to a bituminous conglomerate, which is applied hot for the production of road surfaces, according to the description in the preamble of patent claim. The demands placed on asphalt pavements have been steadily increasing, especially when it comes to highways, because of the increasing number of vehicles, the increasing weight of the trucks, the speed of the vehicles, and so on. The interest has therefore been concentrated in advance on the properties of the mechanical resistance of the bituminous coating to stresses that are often associated with the elastic properties of the material.

Thus, in order to achieve this aim, it has been proposed to mix synthetic elastomer fibers of various kinds (polyethylene, polypropylene, polyvinyl, polyester, etc.) With the mixture of bitumen 105/25 and inert additives. Such fibers, with a length of up to 10 cm or more, have the purpose of connecting the particles forming the batch (sand, fine chippings, etc.) And thus considerably improving the mechanical strength of the lining. Examples of such applications are described in the following patents: US3’753’938, US3’505’260, FR1’525’901, EP0082130A1 , The latter document is particularly concerned with the composition of conglomerates of cement and asphalt containing synthetic fibers and expanded clay particles. In this case too, everything serves to improve the resistance of the bitumen lining to pressure, temperature fluctuations, thermal expansion, etc. The use of so-called light inert materials, such as volcanic ash, pumice stone, expanded clay, together with the heavy inert materials is also described in other documents in connection with the possibility of creating resistant mixtures which are lighter in weight and can be applied more easily. In the IT1169744 is for example describes a cold processable bitumen conglomerate for road maintenance which has the advantage that it can be stored in an active state over a period of several months and which contains at least one light inert material (such as expanded clay) in addition to the usual components of heavy inert materials and bitumen , and contains a liquefying or flow-facilitating additive. Such an additive serves to give the conglomerate its cold plasticity and preservability properties, and to make the conglomerate ideally suited for small road maintenance work (cracks sealer and holes, etc.) Year in year out. The addition of a light inert material also has the stated aim of making the conglomerate lighter, which facilitates dispensing without, however, compromising the conglomerate resistance to pressure and generally mechanical stress. The incorporation of a lightweight inert material has therefore a well-defined purpose and is associated with the specific application for which the conglomerate is intended. In general, it can be confirmed that incorporation of synthetic fibers together with at least a certain percentage of light inert materials has been proposed in order to achieve an improvement in the mechanical properties of the bitumen coating or its ease of application; but with the great disadvantage of a high price, which is why such mixtures have found little application in practice. In addition, no weight is placed on the noise problem in the cited documents of the prior art, or on sound-absorbing properties, which today must have a road surface as a priority. The noise produced by the vehicles has become a problem of great relevance, to the solution of which much is invested (tunnels, sound-absorbing walls, etc.).